Simphiwe Ndzube: In the Order of Elephants After the Rain
Installation View
Galeria Nicodim, Bucharest, 2019 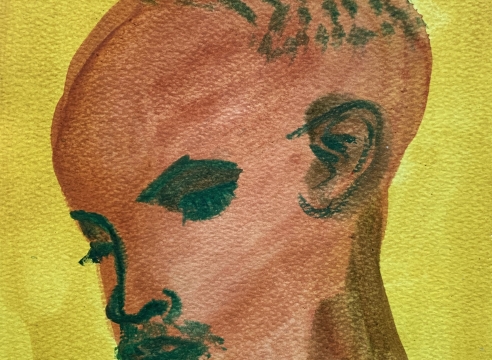 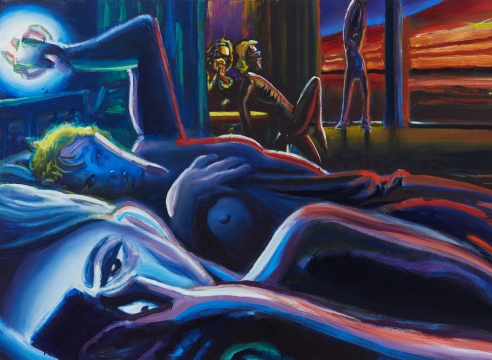 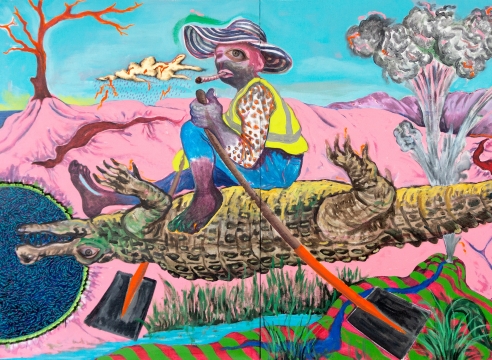 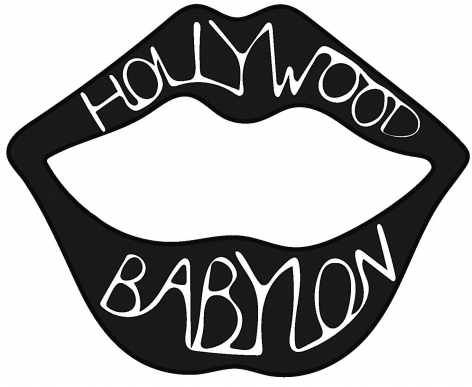 Hollywood Babylon: A Re-Inauguration of the Pleasure Dome
at the Former Spago Restaurant on SunsetPresented by Jeffrey Deitch, Nicodim, and Autre Magazine February 11 – 16, 2020 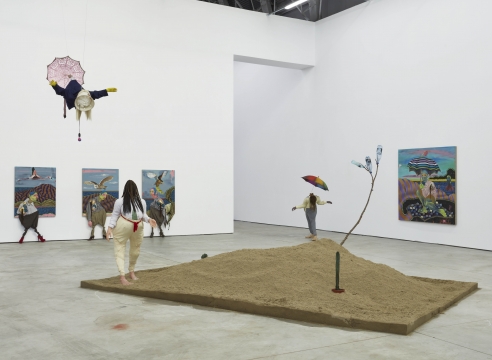 Simphiwe Ndzube: In the Order of Elephants After the Rain
Bucharest September 28 – November 9, 2019 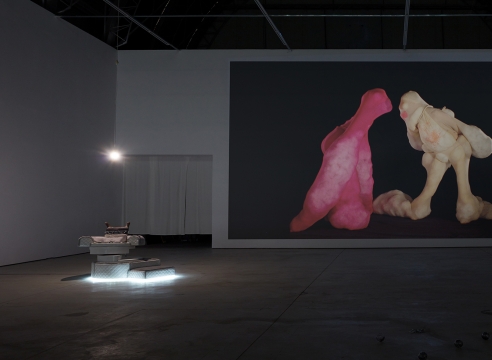 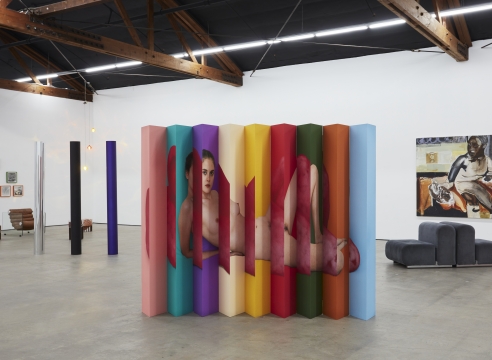 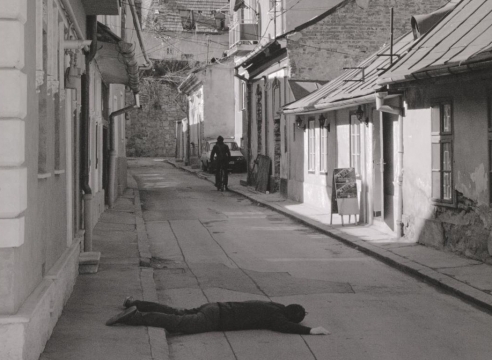 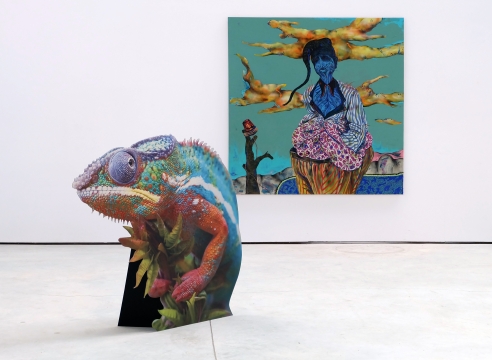 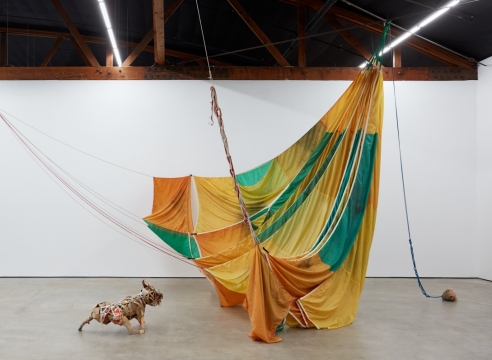 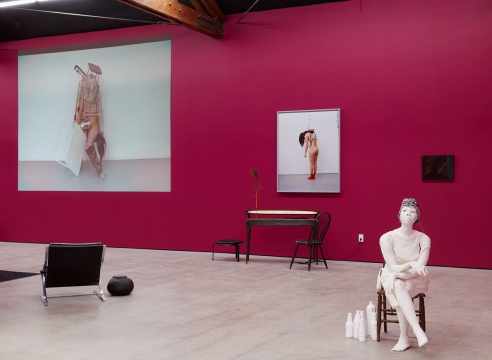 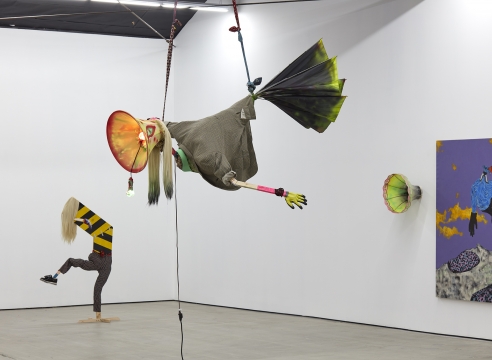 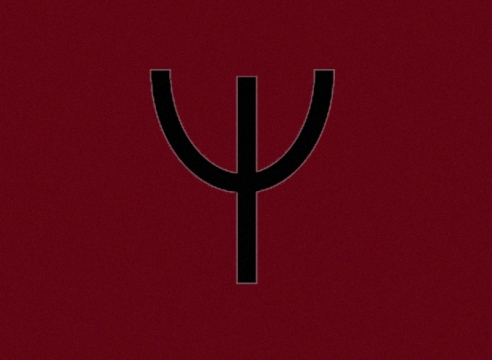 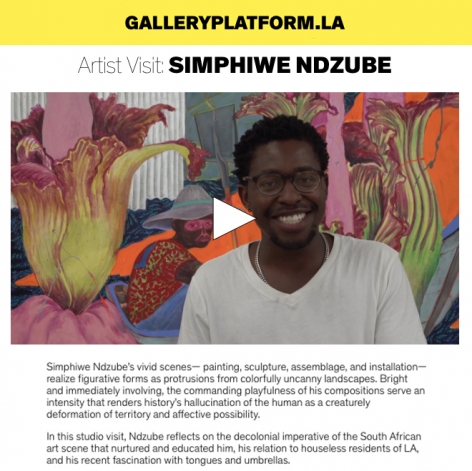 Simphiwe Ndzube’s vivid scenes — painting, sculpture, assemblage, and installation—realize figurative forms as protrusions from colorfully uncanny landscapes. Bright and immediately involving, the commanding playfulness of his compositions serve an intensity that renders history’s hallucination of the human as a creaturely deformation of territory and affective possibility. In this studio visit, Ndzube reflects on the decolonial imperative of the South African art scene that nurtured and educated him, his relation to houseless residents of LA, and his recent fascination with tongues and umbrellas. 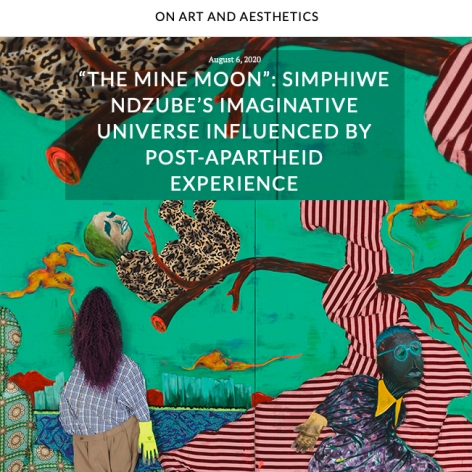 "The Mine Moon": Simphiwe Ndzube's Imaginative Universe Influenced by Post-Apartheid Experience On Art and Aesthetics | August 6, 2020

Simphiwe Ndzube calls his fictitious world—that he uses as a vehicle of truth—the “Mine Moon”. It isn’t escapist, rather it is supposed to facilitate a deeper immersion in reality. The Mine Moon is fantasy, local African legends and national history all in one. It explores themes of power, conflict, exploitation and occupation through instances of violence and humour. The storytelling oscillates between joy and hopelessness. 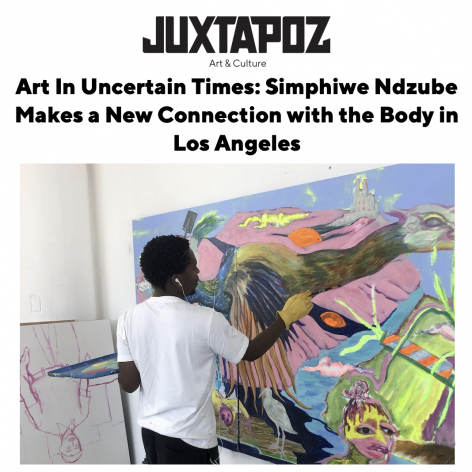 "I’m learning to walk on my hands and feet, so to speak. I think that we all are." Mirroring the vibrant imagination that springs from his work, Ndzube expresses a poetic view of the situation. "I’m feeling a new connection with the body; I’m learning to actually feel it—the body, the heart, breathing, stillness." 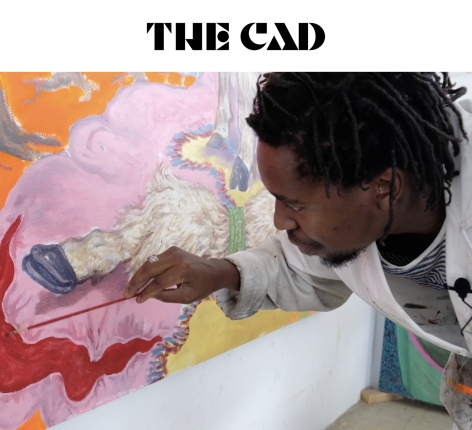 In November of 2019, The CAD spent the day with Simphiwe Ndzube in his LA studio. In this video Simphiwe talks about his creative process and inspiration while he continues to work on some of his new paintings. 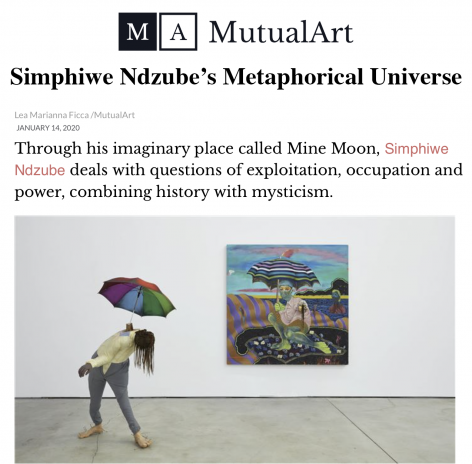 Simphiwe Ndzube's art leads the spectator on a powerful journey of creativity and imagination, where he's invited to explore themes and tradition of Ndzube’s culture. Historical, social and political events of South Africa emerge with strong and energetic language, defining his entire practice, from painting to sculpture and installation. In his works, the artist draws from different aspects of African history and infuses them with magical elements and legends. 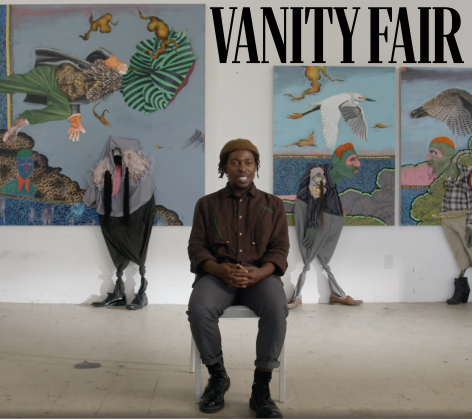 Produced by Vanity Fair with Genesis. South African artist Simphiwe Ndzube takes Vanity Fair and Genesis through his day in Los Angeles, sharing his unique creative process and the inspiration behind some of his most distinctive work. 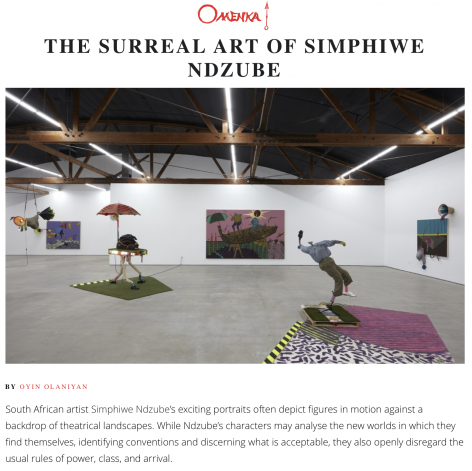 South African artist Simphiwe Ndzube’s exciting portraits often depict figures in motion against a backdrop of theatrical landscapes. While Ndzube’s characters may analyse the new worlds in which they find themselves, identifying conventions and discerning what is acceptable, they also openly disregard the usual rules of power, class, and arrival. 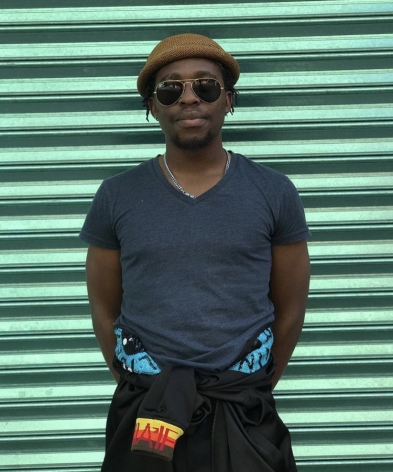 ART Radio interviews Simphiwe Ndzube on his life and practice. "Ndzube is a reminder that Africa is not merely a landfill for a wasted imagination, defunct ideals or ruined fantasies, but a thriving and talismanic force field for a further circulation and recycling of a now further-transmogrified waste." 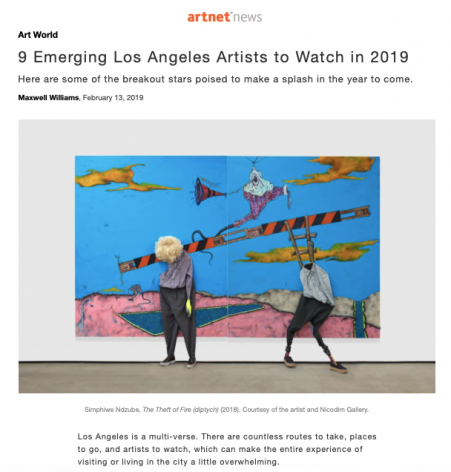 Los Angeles is a multi-verse. There are countless routes to take, places to go, and artists to watch, which can make the entire experience of visiting or living in the city a little overwhelming. Born in Cape Town in 1990, Ndzube often addresses life in the country after Apartheid, but with a surreal narrative structure. His pieces are large-scale, mixed-media collages, featuring grotesque, headless figures in banal clothes sprouting arms, light bulbs, and traffic cones out of their necks while slumping around colorfully abstract dreamscapes. Often, the figures become three-dimensional and the cones and clothes are made from found objects.

Simphiwe Ndzube on 'Waiting for Mulungu' at the CC Foundation, Shanghai in SOLA

Simphiwe Ndzube featured in Sola, with a video interview about his work's relationship to Pantsula dancing in South Africa. Says Ndzube, "When you wake up, you know that the sun will still rise, there is still a reason to dance." 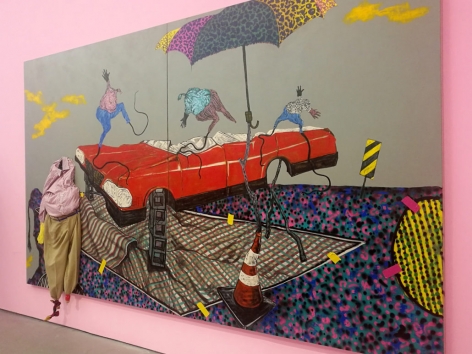 How Simphiwe Ndzube employs the surreal in ‘Waiting for Mulungu’ at the CC Foundation, Shanghai

By Andrew Stooke in Art Africa | June 21, 2018
"In likeness to the surrealists, who turned to absurd and fantastical symbolic imagery as a purgative answer to the gruesome folly of industrialized warfare, Ndzube employs bizarre scenarios, and the juxtaposition of incongruous elements extracted from everyday life, to respond to more recent chapters of violence and injustice. The results are both optimistic and cathartic: an eclipse is a moment of change and a lamp a sign of enlightenment. Even a traffic cone gently directs a new route." 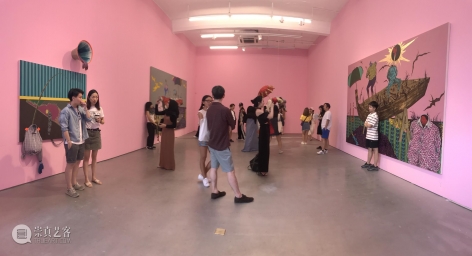 Ndzube’s work, drawing inspiration from African folklore magic realism, is centered on a reoccurring imaginary protagonist, Bhabharosi, on a journey to self-discovery, healing, and searching for meaning in a seemingly godless world... 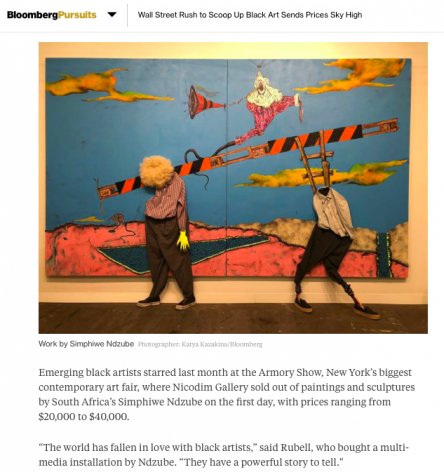 Emerging black artists starred last month at the Armory Show, New York’s biggest contemporary art fair, where Nicodim Gallery sold out of paintings and sculptures by South Africa’s Simphiwe Ndzube on the first day, with prices ranging from $20,000 to $40,000. 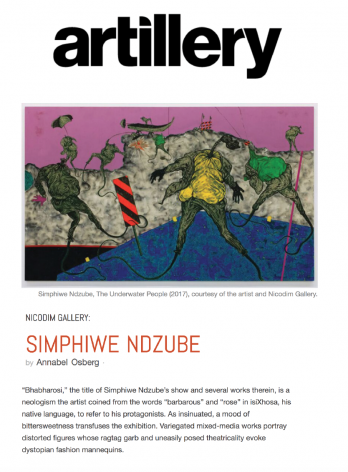 “Bhabharosi,” the title of Simphiwe Ndzube’s show and several works therein, is a neologism the artist coined from the words “barbarous” and “rose” in isiXhosa, his native language, to refer to his protagonists. As insinuated, a mood of bittersweetness transfuses the exhibition. Variegated mixed-media works portray distorted figures whose ragtag garb and uneasily posed theatricality evoke dystopian fashion mannequins. 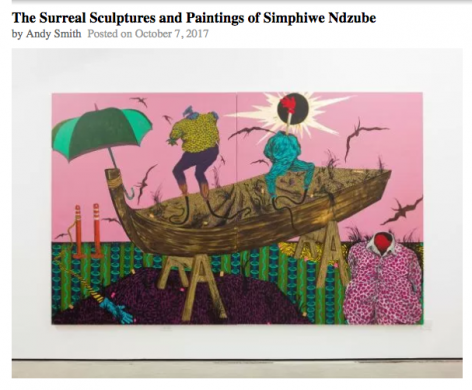 “Bhabharosi” at Nicodim Gallery in Los Angeles is the first solo show from Simphiwe Ndzube outside Cape Town, South Africa, the artist’s hometown. The strange, headless and limbless figures that travel throughout the paintings and sculptures of Ndzube have their own mythology. 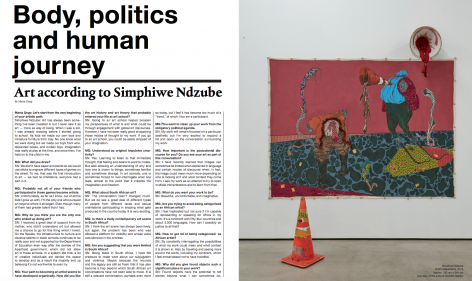 “What artists make is, to a certain extend, an extension of themselves. It somehow shows what is happening in the backs of our minds, how we analyze the world and how we project the world back to ourselves.” - Simphiwe Ndzube