Born only a few months after the Chernobyl Disaster in 1986, Romanian artist Mi Kafchin was inundated as a young child with fear-driven remedies that would help to cure the invisible but pervasive radioactive toxins that enveloped her region and in effect her being. Trust in aspirational progress or the security of big government would dissipate into that same air. The chemtrails that crisscrossed the sky above represented a direct and constant communication of this reality but banalized into a sublime of the everyday. This toxic cocktail of aluminum, barium and strontium militaristically seeded into our atmosphere successfully keeps society under control… at least, that is, until the EMF from 5G begins to vibrate our delicate bodies. This legacy of trepidation from sources governmental, paranormal and extraterrestrial has festered into a menacing ideological vortex of possibility, one looming large in the work of Mi Kafchin and mapped out here in her second solo exhibition at Nicodim Gallery.

The artist’s research is otherworldly in every sense and very much one of exploration. She has embarked on a journey of the self, the mind and the physical plane to discover places that human fantasy has only vaguely articulated. Her ideas are naturally uncomfortable in the way new information can either cause a sickness or inoculate the people. She points to a future of transhumanism, alchemical arithmetic and esoteric realms where her creative mind scries freely into architectures of the unknown.

Inspired by the monumental aesthetics of Mexican muralists like Diego Rivera, Kafchin infuses her canvases with a grandiose pictorial drama of rich storytelling. Allegories of strange loops and inter-dimensionality are astronomically charted throughout this array of worlds. A vision of the Supreme Architect orients viewers not only geographically to our humble Earthen disc but to the drafts of its myriad trajectories, a multiversal echoing of worlds repeated. The compass points to center on our Flat Earth but the object itself is an invention meant to allay the truth with clever placebo. Zooming in we see the 150-foot Ice Wall that represents Antarctica on most maps depicted in another large canvas nearby. The impenetrable shelf complete with aurora borealis is littered with the wreckage of failed missions attempting to traverse its steep icy cliffs. Alternatively in another work, the cavernous center of centers inside our Hollow Earth is described with ornate craggy interiors -- a luxurious fit for our Reptilian Overlord.

In a large iridescent origin story painting, Communist apartment blocks similar to Kafchin’s own birthplace cradle a rainbow sky threaded with intoxicating condensation trails, ones similar to those just above Nicodim Gallery. Kafchin’s own journey into transitory biologies is frequently referenced and in another large canvas we see the interior voyage that changed her physical course, a divine union of selves male and female. The white walls of Nicodim Gallery are imbued with the living tension of the artist’s mark, rendering additional aspects of our journey within the space and extending the narrative of her canvases to infect the physical planes of the gallery. Bricolage statues of transhumanist robots stand tall with wooden sinew and ornamental design. These are avatars for the next step in our evolutionary chain and sculptures that physicalize the population of our undiscovered land. For Kafchin these figures represent a grotesque perfection that our terrestrial bodies can’t yet imagine but are in effect portraits of future humankind.

Mi Kafchin is a fearless explorer, a psychonaut, a crystal child and a world-builder. She is someone who can see clearly without the inhibitions of critical thinking. This is vision in its greatest states of divine and delusional. This avant-garde space for thought is one that has grown uncontrollably online to become something greater than popular logic can restrain. Kafchin has become this realm’s de facto cultural ambassador. Throughout her numerous installations in museums and galleries worldwide, there is always the effort to fully immerse the viewer into her world both physically and conceptually. Accepting mysteries of chance and not-knowingness always plays an important role towards suspending belief and forcing open the gateways to alternate worlds. For this installation she will offer us all the gift of avant-tourism: an invitation to see a cosmology of the unknown and traverse its majestic lands. 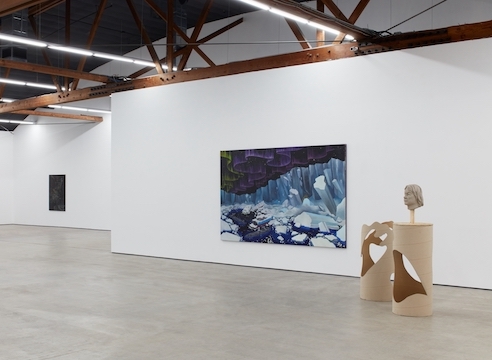 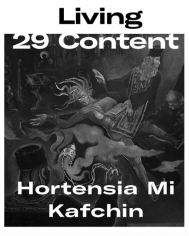 In this intimate conversation with LC, Hortensia Mi Kafchin (b. 1986, Galati, Romania) explains how most of her paintings can be read like a journal. The information she absorbs from art history, philosophy, science fiction, conspiracy theories, and popular culture, mixes with childhood memories from Romania, as well as with her dreams and fears. She talks about how a near-death experience shifted her entire worldview, and how her recent transition from male to female inspires her to explore internalized issues related to her gender, and her relationships to God, time, and death. She describes these experiences among others, to elucidate some of the meanings behind the reoccurring elements in her paintings. 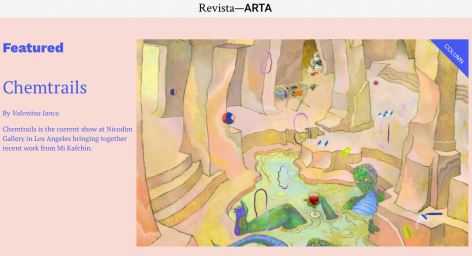 Pollution has clogged all of our pores. Radiations of all kinds traumatize our tissues. Chemtrails. Will nature survive this new culture? Will any bit of humanity survive these transformations? What will the humanoids of the future look like? 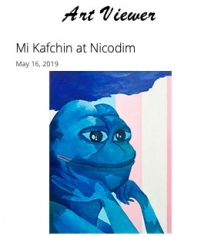 This avant-garde space for thought is one that has grown uncontrollably online to become something greater than popular logic can restrain. Kafchin has become this realm’s de facto cultural ambassador. 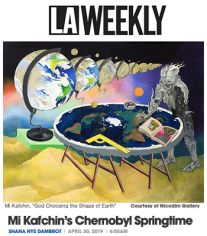 In Mi Kafchin’s canvases, compositional tension is built between the push and pull of brutalist architectural splendor and feral, radioactive nature; while narrative dimensions unfold with the inscrutable mythology of post-Soviet displacement, disinformation and conspiracy, randomness and rebellion. 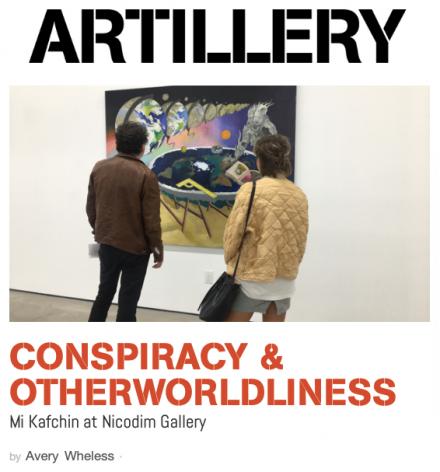 In “Chemtrails,” Kafchin visually represents her incessant internal escapades, which attempt to process how radioactive toxins from Chernobyl and other infiltrating forces altered her body and mind. Kafchin boldly evokes surreal and not popularly acknowledged concepts. Her work illuminates the frightening realization that in the grand scheme of things, we have little agency in controlling that which we don’t fully know—and as Kafchin illustrates, it’s quite a lot. 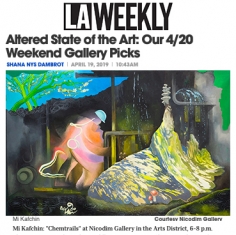 Mi Kafchin's research is otherworldly in every sense and very much one of exploration. She has embarked on a journey of the self, the mind and the physical plane to discover places that human fantasy has only vaguely articulated. 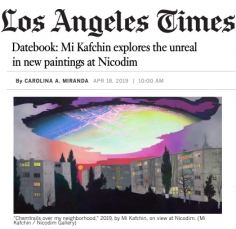 An exhibition inspired by chemtrails, the conspiracy theory that long-lasting condensation trails could be evidence of biological or chemical attacks or some other form of control. The show delves into the otherworldly, featuring a series of paintings that explore the making of and colliding of the real and the unreal. 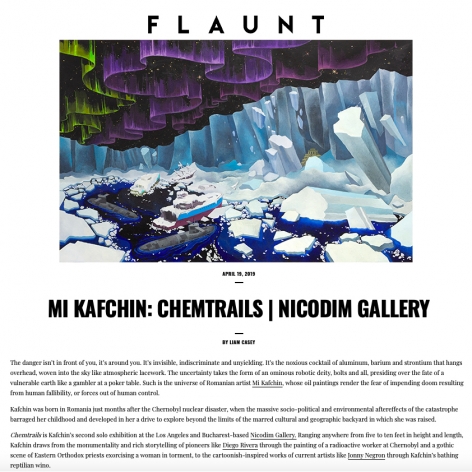 The danger isn’t in front of you, it’s around you. It’s invisible, indiscriminate and unyielding. It’s the noxious cocktail of aluminum, barium and strontium that hangs overhead, woven into the sky like atmospheric lacework. The uncertainty takes the form of an ominous robotic deity, bolts and all, presiding over the fate of a vulnerable earth like a gambler at a poker table. Such is the universe of Romanian artist Mi Kafchin, whose oil paintings render the fear of impending doom resulting from human fallibility, or forces out of human control.