Mihai Nicodim Gallery is proud to present the first solo show in the United States of the Czech artist Daniel Pitin.

Born in 1977, Daniel Pitin is part of a new generation of painters from Eastern Europe currently gaining a wide recognition from both institutions and private collections.

Filmic images have adopted a key role in the work of Daniel Pitin. As the artistic treatment of the interrelationship between images, film provides him with a point of departure and a source of inspiration. With film footage from the Communist period, which was part of his youth, stills from the seventies TV series and detective series, Pitin creates fictional settings by editing images and using the process of painting to create an open space where interplay with memory may have its stage.

The motifs and design principles are frequently reminiscent of theatrical stage sets, communicative spaces following different narratives and which are also produced when seen by the viewer. In this fictional architect’s diary the characters inhabiting the settings are often distinguished by theatrical poses and their gestures and facial expressions suggest an existential aura conveying an image of a theatrum mundi, the world as a stage.

Daniel Pitin was featured in Prague Biennale 3 "Expanded Painting 2“ in 2007, winning the Mattoni Prize and in 2009 he curated the Czech section of the Prague Biennale 4. In fall 2010 he will show in the exhibition "After the Fall“ organized by Marc and Livia Straus for the Hudson Valley Center for Contemporary Art, NY. 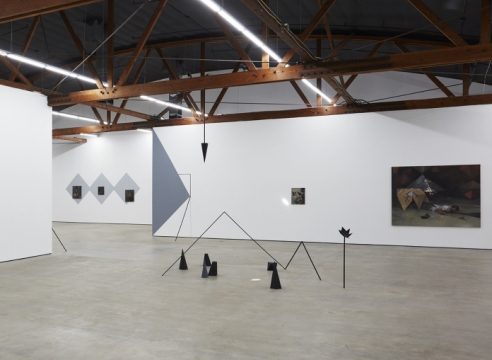