Nicodim is proud to present Robert Yarber: Anamorphic! Sublime!, an exhibition of psychedelic works on paper at the gallery’s location in Bucharest. Yarber’s drawings conjure the transcendent and approach the sublime through comic iconography, weaving together the allegorical, the mythical, the apocalyptic, the miraculous, and the outrageous.

With the mentality of a perverted carnival-barker plying his trade in the overcrowded marketplace of visual symbolism, Yarber speaks through a bizarre cast of characters, exhortations, and props. Narratives are driven by floating skulls and sea captains, skeletal tricksters, grim reapers, gold bars, and exploding cigars, calling-out as if to mock the eternal recurrence of meaning itself. Something is always imitating something else. The Thing featured in his work has emerged from another thing. Yet the twitch to understand the meaning of the this or that in the drawings and what its for never truly dies; the inner-ear always yearns to feel the buzz. 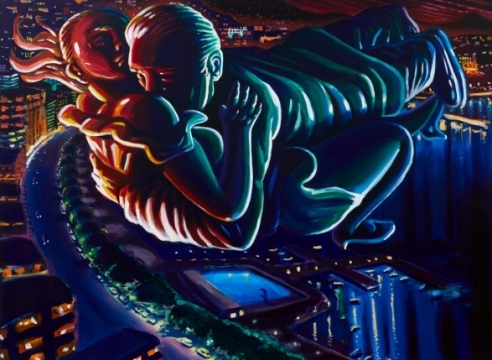